Love and Death Among the Cheetahs Audiobook 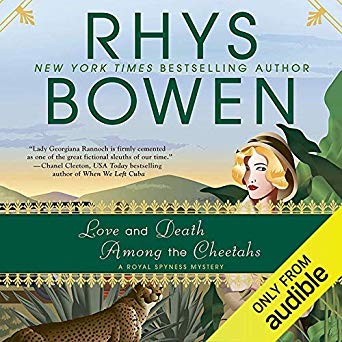 Georgie and Darcy are finally on their honeymoon in Happy Valley in Kenya, but murder is crashing the party in the New York Times best-selling series in this all-new installment.

I was so excited when Darcy declared from the blue that for our extended honeymoon we were flying to Kenya. I think he was actually sent to perform another secret mission now that we are here. I’m trying hard not to strike up a fight because we’re in paradise after all! Darcy eventually confides that London and Paris have been robbed. The thief claims to have been an elite leader and may have fled to Kenya. Because we’re living in the Happy Valley-the hub of English upper-class life-we’re well placed to hunt for clues and hunt for potential suspects.

Now that I’m a sophisticated girlfriend, I do my utmost to sound like one. Crikey, though! Such aristocrats are a completely loathsome type that enjoys a totally decadent lifestyle full of wild parties and gross infidelity. And Lord Cheriton, one of the community’s leading lights, has the nerve to make a match of me. While I’m in my sweetheart! I’ve put an end to that right now, of course.

When he finds himself bloodied and dead along a desolate stretch of road, he seems to have fallen victim to a lion. But the Happy Valley family seems to want to close the case a little too late. Darcy and I soon learn there’s far more to deal with here in Kenya than a simple robbery and an animal attack. Nearly everybody is driven to want Lord Cheriton to die, and many would go to great lengths to silence someone who asks too many questions. There’s a hunt! I just hope that I will survive my honeymoon long enough to apprehend a killer….