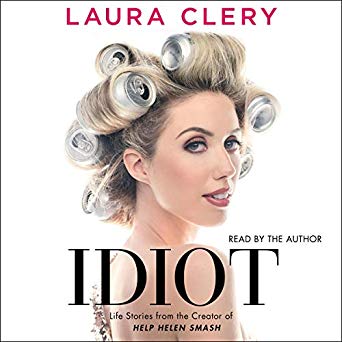 A series of humorous essays in the form of We Are Not Meeting in Real Life by Samantha Irby and You Get Out of It by Jessi Klein comes from YouTube Star and Facebook Video Sensation Laura Clery.

Laura Clery makes a living for millions of strangers on the internet by posting insensitive comedy sketches. She writes songs about her sexuality, sings about her one-eyed rescue pug, and her brother, Stephen, is sexually harassed. And the bills are paying!

Now, in her first-ever audiobook, Laura reveals how she has gone from being a deeply impulsive, depressed, homeless, suicidal, cocaine-addicted narcissist, plagued by anxiety and jumping from one toxic romance to another… to a more-happy-than-not, relatively reasonable, meditative, good-credited vegan yogi, a great marriage, a fantastic career, and four unfortunate-looking rescue animals. But, above all, Laura remains a self-described, incredibly talented, cute, and vulnerable… Idiot.

Idiot introduces you to a wildly original-and undeniably connected-new voice with its signature style of offbeat, no-holds-barred comedy.