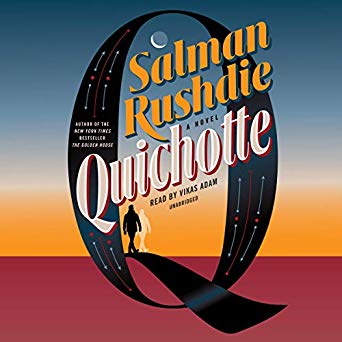 An epic Don Quixote for the modern age, “a clever, humorous, world-wide wonder” (Time) by globally best-selling writer Salman Rushdie SHORTLISTED FOR THE MAN BOOKER PRIZE “Lovely, unsentimental, heart-affirming… a reminder of what keeps our human lives in some balance-a way of thinking and saying. Love and language.” Together with his (imaginary) son Sancho, Quichotte embarks on a picaresque journey through America to prove worthy of his side, gallantly braving the tragicomic hazards of an era in which “Anything-Can-Happen.” Meanwhile, his maker, in a crisis of midlife, has his own similarly urgent challenges.

Just as Cervantes wrote Don Quixote to satirize his time’s society, Rushdie takes the listener on a crazy trip through a world on the brink of moral and spiritual collapse. And with the sort of narrative magic that is the hallmark of Rushdie’s work, DuChamp and Quichotte’s fully realized lives intertwine in a deeply human search for love and a wickedly entertaining portrayal of an era in which reality is so often indistinguishable from fiction.