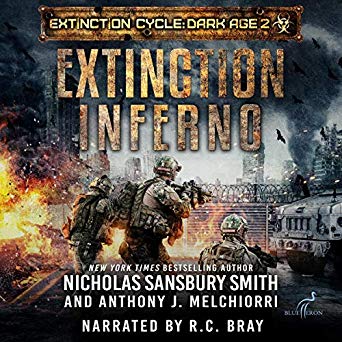 The government said the variants had died off….

That in a matter of years the animals would be extinct….

The stability and liberty had returned to the Allied States….

The state was right dead. The Variants were not just hiding beneath the villages, they were breeding. While the Extinction Cycle’s human survivors constructed outposts and brought back factories, they made their own monsters. They created a vast underground organic network to command this new army and initiate a blitzkrieg offensive across the Allied States, collaborating with human collaborators. Upon tunneling under the walls, even the most fortified outposts were overrun by the beasts. Within days, many of them fall, causing the army to abandon bases and withdraw.

Yet not all of them are on the run. Team Ghost is chasing a creature behind enemy lines that might change the war’s tide. On the USS George Johnson, while oil tycoon S, Dr. Kate Lovato and her research team are trying to understand and tap into the Variant network. M. Fischer and his engineers are developing a plan to help the remaining outposts buy time. So Captain Reed Beckham so Master Sergeant Parker Horn are investigating a terrifying conspiracy involving human partners at Outpost Portland.

As the Variant armies advance across the Allied States, even desperate measures may not be sufficient for those trying to stop them to prevent their country from being completely annihilated.