The Only Plane in the Sky Audiobook 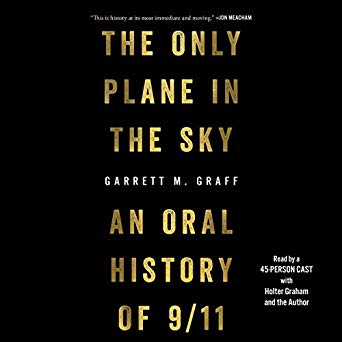 Much has been written and talked about the September 11, 2001 terrorist attacks and the profound impact they had on America and the world over the past 18 years. But never before have those names, tales, and memories been gathered in one place to tell the complete, 360-degree story of what happened that day and the days after.

In The Only Plane in the Sky, Garrett Graff, an award-winning journalist and author, draws on extensive transcripts, recently declassified documents and original interviews and accounts from nearly 500 government officials, first responders, witnesses, victims, friends and family members to create the most detailed minute-by-minute account of the attacks of September 11. From the firefighters who rushed into the smoke-filled stairs of the Twin Towers to the fighter pilots scrambled from the air bases across the Northeast with orders to shoot down any stolen commercial aircraft; from the teachers who kept their terror in the bay while evacuating frightened children from schools just blocks from the World Trade Center; from the devastated family members who were impotently trapped; The outcome is a special, intense and searing human exploration on a day that has changed the course of history and our entire lives.